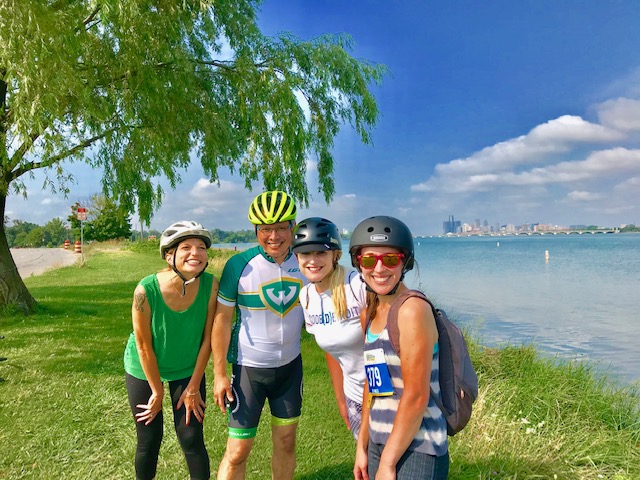 For the second year in a row, the Wayne State Library System is forming a cycling team to ride in the Baroudeur, the annual bike ride to benefit Wayne State student scholarships.

Scheduled for Saturday Aug. 17, the Baroudeur (French for “warrior”) is a fun, noncompetitive event that allows cyclists of all skill levels to explore the Motor City on two wheels while raising money for a good cause.

This year, the Library System team will ride to help fund the student emergency grant, which offers emergency financial assistance to students who aren’t able to meet immediate, essential expenses because of a temporary hardship.

Co-captain Alison Stankrauff (MLIS ’02) is excited to ride the Baroudeur again this year and, like her teammates, is eager to help students in need.

Stankrauff, an archivist at the Reuther Library, first started long-distance cycling when she moved to Detroit in 1999. But even before that, she was no stranger to bicycles.

“I’ve been cycling since I got my trainer wheels off,” she says.

Baroudeur group training rides take place every Tuesday at 6 p.m. and leave campus from the TechTown parking lot at Cass and Amsterdam. There are four different groups that ride various distances with paces to accommodate all fitness levels.

The Library System team also meets for its own training rides Wednesdays at 5 p.m. in front of the Undergraduate Library.

Stankrauff says the Baroudeur is a great event for anyone who loves libraries and loves to cycle. She said she’d love to see more SIS alumni and students join the team.

“SIS students and alumni are welcome to join us,” she says. “The more, the merrier--it’s a great way to catch up with old friends from the program and explore the city at the same time!”

WSU School of Information Sciences grad student and team co-captain Amanda Gantchev was a Baroudeur volunteer for her first two years before jumping into the fray last year as a participating cyclist. She hadn’t biked much since high school, but last year Gantchev was inspired to join the team by former WSU library director, SIS alum and avid cyclist Rod Fiori (MLIS ’11).

“I ordered a bike off Amazon Prime at the last minute,” she says. “It was the only one they’d deliver in two days.”

She ended up riding 62 miles.

For this year’s Baroudeur, Gantchev, who works as an applications specialist in the UGL, has upgraded to an Italian road bike.

But that doesn’t mean she plans to set the pace.

“We’re just going to take it easy this year,” she says.

The ride is sure to be an adventure. “Last year, we almost rescued these stray dogs,” Gantchev says, “so this year we’re bringing dog food with us in case we see some stray dogs again.”

Stankrauff, who’s ridden her bike all over the world in places such as Thailand, Iceland and Sri Lanka, says Detroit is a great city to ride in because it’s so flat.

“Every neighborhood is different from the next, and each one has its own interests and charms,” she says. “Detroit has these really broad avenues where there’s not a lot of traffic,” she says, “so for better or worse, it makes for some really great cycling.”