School of Information Sciences alumna Cathleen Russ was named the 2019 MLA Librarian of the Year. 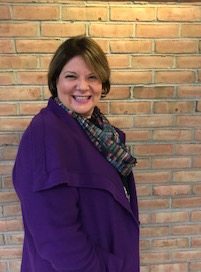 Russ, director of the Troy Public Library since 2007, is a well-respected leader in the library community. She received a bachelor's degree from Loyola University Chicago and a master's of library and information science from Wayne State. She currently serves on the board of the Michigan Library Association and was awarded the Distinguished Alumni Award from Wayne State's School of Information Sciences in 2013.

Although Russ had worked in libraries for most of her career, she took a non-traditional route to find her path to librarianship and to Wayne State. "I never wanted to be a librarian," Russ said with a laugh. "I love to read and I love to talk with people about books, but I didn't love the reference part of it, so I resisted getting my library science degree."

After working in circulation for nine years at the Troy Public Library, Russ worked her way up and later was hired for the role of director of Center Line Public Library, where they did not require an advanced degree. It was there she says, she decided that this was the career for her and if she wanted to pursue a director position at a larger library then she was going to have to get a master's, which led her to Wayne State.

"Wayne State helped me broaden my view of librarians and what they do and the many, many things you can do with a library degree," said Russ. "My job working in the library informed my education and that was so valuable. I thought of the library as my petri dish and I was able to experiment and use what I had learned in class in the library to see what did and didn't work."

Many of Russ's electives gave her exposure to public library service, giving her a well-rounded experience that she says helped her become a better director.

After graduating, Russ came back to the university as an adjunct instructor in library administration and management. It seemed to her that people often avoided administration roles because of the business-related aspects of the job, including employee management, budgets and the politics of it all. Russ says she was glad to demystify those experiences for students while mentoring them and providing them with the tools to consider administration as a career option.

Russ's role as a mentor was a major factor in the MLA's decision to name her Librarian of the Year. "As we read through the letters of support for Cathleen's nomination it became clear that she has been a guiding force for Michigan librarians on both a micro and macro level -- she has mentored library professionals one-on-one, taught our profession's fundamentals and ethics in formal classroom settings, coached colleagues at statewide workshops, and advocated for all Michigan libraries on the Board of the Michigan Library Association," said Juliane Morian, MLA awards subcommittee member and annual conference chair. "In short, Cathleen elevates librarianship from occupation to vocation."

Russ is the eighth Wayne State graduate to have received the MLA Librarian of the Year Award, which recognizes an inspiring librarian who has provided outstanding accomplishments and contributions to the library community.

"Teaching was my first real opportunity to mentor and help people get where they wanted to go and Wayne State put me on that path," said Russ. "Receiving the Librarian of the Year Award was very meaningful to me because I received it in large part for mentoring. I believe so strongly in mentoring and growing the next generation of librarians and administrators. It's an honor to do that because I've had help and I want to pay it forward."