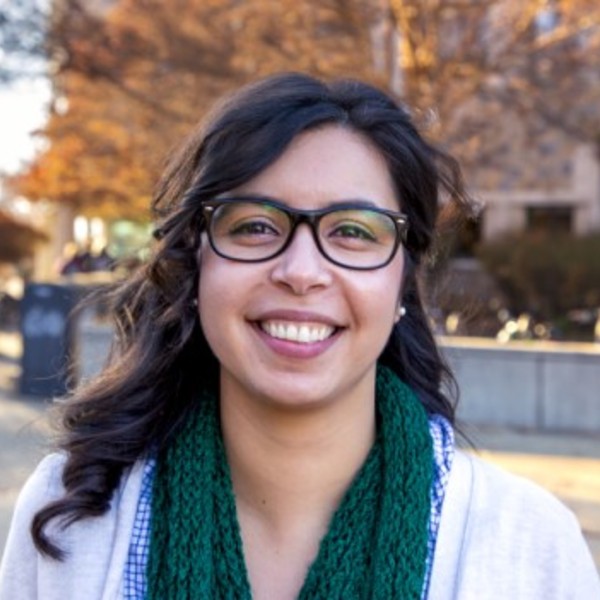 "Part of the reason why I picked Wayne was because it had so much practical application...One of the great things about Wayne is the projects I did have informed the way I’ve approached things here. That kind of practical knowledge is something I was really looking for."

Ana Corral is a School of Information Sciences alumna who graduated in 2019. She is the resident librarian at Virginia Tech University and is in the second year of her residency. The residency includes working in rotation between three to four departments during the first year, and then choosing one department in which to work for the remainder of the three-year program. Corral recently decided to complete her residency in the research and collaboration department.

“Residencies tend to be very unique, individualized experiences,” Corral said. Many of the projects she has worked on in her residency have been fluid and ongoing within each of the departments.

One of Corral’s current projects involves trying to assess the diversity within the collections at Virginia Tech with Collection Strategist Nitra Eastby. This important work is a huge undertaking. “How do you asses collections based on these criteria when the collections have never been assessed like that?” Corral asked. Despite the daunting task, Corral quickly strategized ways to create manageable projects under the same goal by focusing on the language aspect of the collections. “This is the part that I am specifically interested in - creating diversity or representation of different languages within the resources that the university libraries have. I would like to continue my work in this regardless of where I go in different departments,” she said.

Corral said that she is passionate about doing this work because although universities aim to have diverse student bodies and want to recruit international students, they often fail to recognize that many of these people may speak English as a second language. Her work is geared to providing resources to make these individuals feel more at home, and to remove barriers so they have a better experience when researching the university and interacting with others.

One of the projects that Corral worked on was an event that did not turn out as she had hoped. She feels that projects that didn’t have the most desirable outcome are worth mentioning. “When you go to conferences and meet people, they all speak about their most successful programs, failing to mention the steppingstones that lead to that success,” she said. “I think those [projects] are just as, if not more, important than the ones that do go well because they make you really think, ‘What could I have done differently?’ and ‘What factors affected the success of this program?’”

Corral said that the MLIS program at Wayne State prepared her well for her current work because it was self-lead and you could work independently, but there were also great opportunities to connect with other students and faculty. “Part of the reason I picked Wayne was because it had so much practical application. I went to Berkley [for undergraduate studies] and it was so theory heavy. I wanted something that I could tangibly show, ‘look I have experience doing this,’ not ‘I have experience theorizing about how to do this.’ One of the great things about Wayne is the projects I did have informed the way I’ve approached things at Virginia Tech. That kind of practical knowledge is something I was really looking for.”

Outside of her residency, Corral hosts the Comunidad Book Club, which involves a partnership between the Blacksburg Public Library, LASO (Latino Association Student Organization), Virginia Tech Libraries, and El Centro, the Latinx community and cultural center on campus. The book club allows participants to read the selected book in English or Spanish, however, the monthly meetings feature a Spanish-only discussion led by Corral. She hopes that this book club will provide a framework for other academic libraries follow in partnership with public libraries and nonprofit organizations in their areas. Comunidad is now accessible to anyone with internet access, so Ana encourages anyone who is interested to join the club.

Corral’s tip to incoming students is that they should invest in a good method of organization that works for them. Coral’s favorite way to coordinate her agenda is an old-fashioned physical planner paired with fountain pens. She also said that saving your syllabi and recommended readings throughout the program can be useful to any research you might do related to the field in the future.