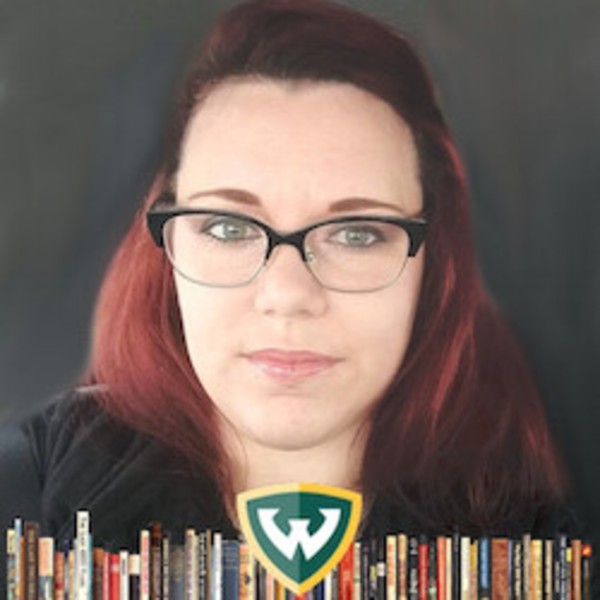 Making connections is the key to success in an online-only program. I would encourage students to get involved.

When she chose to major in English as an undergrad at the University of Puget Sound in Tacoma, Washington, Carady DeSimone quickly tired of people asking her if she wanted to teach. It never occurred to her that she may belong in libraries or archives or even how to get there. Like many of her fellow students, DeSimone’s journey to Wayne State was a winding one, but she finally found the university’s School of Information Sciences and discovered it was a perfect fit.

In high school, DeSimone dreamed of her interest in journalism turning into a career as a newspaper or magazine editor. As she worked at Puget Sound’s college radio station the world of print media began its seeming downfall as small newspapers and publishers were shut down or bought out by large corporations.

“After college I tried doing everything I had done before, but with no luck,” said DeSimone. “I needed to find my ‘real job.’ I wanted to be able to have a trade, a marketable skill, so I switched gears and enrolled in the military.”

Although she was questioned for enlisting after already having earned a bachelor’s degree, DeSimone’s live audio experience made her a natural for the role of communications electrician with the U.S. Navy.

“The systematic methods used in Naval Administration, while frustrating for some, came to me naturally,” DeSimone said. “My supervisors quickly realized my strengths and I was appointed the position of Divisional Librarian.”

A career in the military can take a physical toll, so after a few years DeSimone received a medical discharge. As she transitioned out of the Navy, she was offered a role with Shore Command. It wasn’t a surprise when she excelled in the highly administrative, high-volume personnel processing hub. As the role was temporary, she was still left wondering, “what’s next?”

“I thought about pursuing a career in technical writing, but the people hiring for those jobs wanted applicants to have an engineering background,” said DeSimone. “So more than a decade after graduating with an English degree, I decided to go back to school to pursue a bachelor’s degree in engineering.”

While fulfilling prerequisite classes, DeSimone ended up in English 101. When the instructor took a look at the first draft of a paper she wrote, he pointedly asked her, “What are you doing in my class? I think your talents would be wasted in engineering.” That instructor verbalized exactly what she had recently discovered: She was on the wrong path.

“I had an interest in genealogy and I began to think, ‘Could I do this for a living? Could I be a professional genealogist?’ and it turns out, yes, that’s totally a thing!” said DeSimone. “I did some research and discovered MLIS programs and everything started to click together.”

DeSimone found that Wayne State’s online-only certificate in archival administration was exactly what she was looking for. Now based in Melbourne, Florida, she has never set foot on campus, but says the university’s Office of Military and Veterans Academic Excellence has been instrumental in helping her find her way. As a non-traditional student, she needed an organization that could handle the different requirements for a master’s-level student.

As a student, DeSimone said that although the stability of a traditional job in processing selections would be nice, she was intrigued by the idea of working on a freelance basis for archive or processing projects concerning subjects she feels passionate about. She graduated in 2020 and is now working as a contract archives technician for the National Park Service.

DeSimone says that making peer and industry connections is the key to success in an online-only program.

“I would encourage students to get involved with a state or regional archive or library association,” said DeSimone. “The Society of Florida Archivists basically adopted me and it’s made a huge difference.”