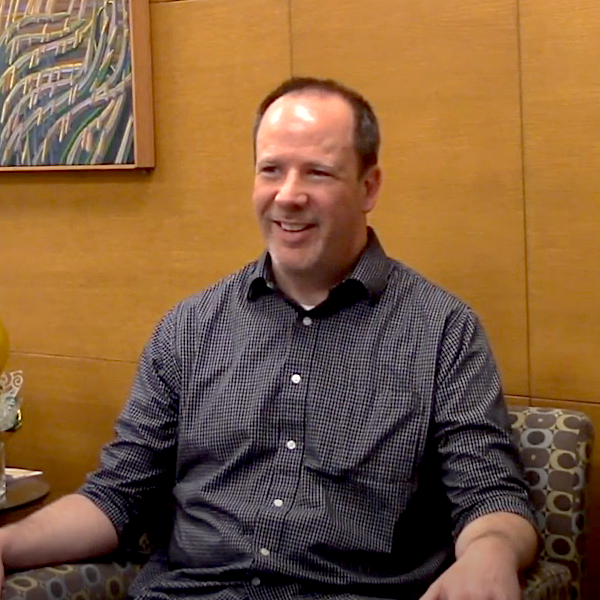 When you come across inspirational items in an archive, it's what gives you the passion to want to make them accessible to the public.

He stopped by campus (pre-COVID) and spoke with Academic Services Officer Matt Fredericks about the excitement and intricacies of processing film and video from MSU football and basketball games from the 1930s and beyond, allowing them to be more widely accessible to Spartan fans around the world.

Read excerpts from their conversation below or watch the video here.

Wilcox: I wanted to come down and be able to give my thanks, because Wayne State’s where I finished my degree. I had been wanting to be a librarian for twenty years when in 1999, I learned about a field of study called Music Librarianship. I have a minor background in music.

Wilcox’s dreams of becoming a librarian were put on hold and he worked in retail management for 10 years. Once he learned he was going to be a dad, he was inspired to follow his dreams. He went back to school to complete his bachelor’s degree and went on to receive his MLIS in 2014.

Fredericks: Where did you start in the field after you graduated?
Wilcox: Well, when I graduated, Kim Schroeder placed me at the MSU archives to serve a practicum, and when I finished my degree asked if I could stay on part time. I was doing part time work at the archives, and I was also doing AV support at Lansing Community College’s West Campus, nights.

Fredericks: So, you had a position you always wanted, but were you hanging on, waiting for a full-time position?
Wilcox: That's right. The work in LCC was really helpful because I was working mostly evenings and when there was downtime, that allowed me the opportunity to work towards my library degree. But also, because it was audio visual support I was learning a lot about audio visual equipment. That helped me get a better understanding of the equipment that the MSU archives had.

Fredericks: So all of that came together with the practicum in your final semester?
Wilcox: It did. It was interesting because when I first got placed at the archives, I started off processing papers, the Clark Browdy papers. I thought that that was mildly interesting work, but I was looking for something a bit different. Then a co-worker turned me on to the digitization lab, which was just a small cubicle at the time. He showed me how to digitize a VHS tape and that brought back the experience that I had with my work at LCC, and my earlier work at the Art Institute in Pittsburgh, working on music and video business. It kind of summarized everything that I was doing.

Once I started doing that, I decided to change my area of expertise in my college degree to archives and digital content management. When I got my degree, I asked if I could stay on part time. I did for about four and a half years until my current full-time position was available.

Fredericks: So you weren't set on the archives track in the beginning?
Wilcox: No, not even close. When I first started my degree, my concentration was academic librarianship until almost my last semester.

I was doing some volunteer work at the Charles Wright African American Museum. I’d go over and grab some audio reels, walk them over to the digitization lab here on campus. One reel that I thought was really interesting was James Ray, a white priest who was beaten to death for standing up for equal rights in the south in Alabama. Martin Luther King gave his eulogy. I thought that was very powerful.

When you find works like that, it’s what gives you the passion to want to be able to make this work accessible to the public.

Fredericks: Did you belong to any student organizations while you were at Wayne State?
Wilcox: Unfortunately, there wasn't much time for student organizations, but I was on the board of directors for the Capital Area Down Syndrome Association. My son was born with Down Syndrome and they've been a wonderful community. A great place to be able to provide resources for families. I wanted to be able to give back. I made my way onto the board and served as president of the organization for one year.

Fredericks: Some of the athletic footage you’ve worked on was processed and used fairly quickly.
Wilcox: The part time work was great because it's given me a chance to better understand the collections that we have and the AV materials in the archives. The bulk of my work has been working with Spartan athletic films. We worked out an arrangement with MSU athletics and they said, “We know that you've got thousands of reels of 16-millimeter film of games; basketball games going back to the 40s, football games going back to the 30s. We want to make it accessible. We want to start creating these halls of history to remember past players and past games.” For a year and a half, I was working on Spartan basketball films – about seven or eight hundred reels of film – for the Tom Izzo Hall of History and the Breslin Center. Once that work was completed, I began to work on Spartan football films for a new addition in the Duffy Daugherty building.